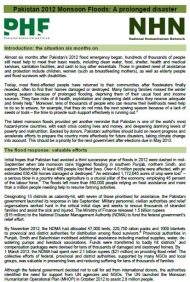 Users are encouraged to like and promote content (promoting content requires a trusted account, which can be requested from your profile page) in order to give an indication of the document's quality to other users. A low popularity rating indicates a resource's low relevance. The content shall nonetheless remain in the library, since some user felt it relevant enough to upload. For content which is entirely inappropriate or offensive, users are encouraged to report the offending resource. A site administrator will then verify if it should be removed from the library.

Almost six months after Pakistan’s 2012 flood emergency began, hundreds of thousands of people
still need help to meet their basic needs, including clean water, food, shelter, health and medical services, sanitation facilities, and cash to buy other essentials. Those in greatest need of assistance and protection include children, women (such as breastfeeding mothers), as well as elderly people and flood survivors with disabilities.

Today, most flood-affected people have returned to their communities after flood waters finally
receded, often to find their homes damaged or destroyed. Many farming families missed the winter sowing season because of prolonged flooding, depriving them of their usual food and income sources. They face risks of ill health, exploitation and deepening debt unless they receive adequate and timely help. Moreover, tens of thousands of people who can resume their livelihoods need help to do so to ensure, for example, that they do not miss the next sowing season because of a lack of seeds or tools – the time to provide such support effectively is running out.

The latest monsoon floods provided yet another reminder that Pakistan is one of the world’s most hazard-prone countries, with each crisis costing lives and money, and deepening alarming levels of poverty and malnutrition. Backed by donors, Pakistani authorities should build on recent progress and accelerate efforts to prepare the country more effectively for future disasters, taking climate change into account. This should be a priority for the next government after elections due in May 2013.

Responding to the COVID-19 pandemic

The Environment and Humanitarian Action

On World Education Day: Praise for schools built by Qatar Charity for orphan students in Bangladesh

United Nations Office for the Coordination of Humanitarian Affairs (OCHA)

HOW DOES SHELTER AFFECT...