Home All collections Shelter Meeting 10b 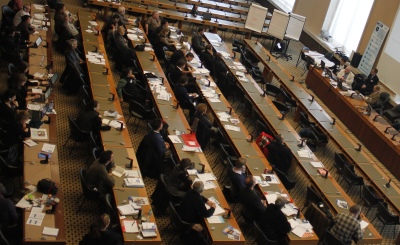 Shelter Meeting 10b, 'Inter-Sector Response', took place on 2nd and 3rd December 2010 in Geneva, hosted by UN/OCHA.
The Meeting was attended by representatives of the World Bank, World Economic Forum, 3 humanitarian donors, 5 IASC clusters, 6 UN bodies, 26 NGOs, 2 IOs, 4 representatives of the Red Cross Movement, 5 independent humanitarian shelter experts and 1 government, as well as researchers from 6 academic institutions.
Thursday's presentations included the announcement of seven new publications and tools including IFRC's Owner-driven Housing and Reconstruction Guidelinesand UN/OCHA's 'Shelter after disaster' guidelines.
Friday’s meeting began with the regional technical humanitarian workshops initiative and included partners teleconferenced in from Bangkok. From there, discussions moved to a broader perspective of inter-sector relations development. In line with SM10b’s inter-sector priorities theme, a call for the development of a prioritised inter-sector/cluster technical work plan was established, having the objective of supporting existing, formal mechanisms in understanding opportunities and challenges for inter-cluster coordination.
Feedback Shelter Meeting 10b
Feedback and commentary on proposals is still being accepted. For those unable to attend due to weather, those who did not have the opportunity to attend or participants that have further commentary, please fill out the Shelter Meeting 10b feedback form here: http://sheltercentre.org/meeting/shelter-meeting-10b/feedback
Agenda
Day 1, Shelter Meeting 10b, Thursday 2nd Dec 2010

Resources on this Collection

From Shelter Relief Into Permanent Housing in Haiti: how do we get there?

Responding to the COVID-19 pandemic

The Environment and Humanitarian Action

On World Education Day: Praise for schools built by Qatar Charity for orphan students in Bangladesh

Treaty on the Southeast Asia...

Save the Children International